The recommended level editor is NetRadiant.
See Level editors for other tools.

Some linux users may experience problems when trying to run it by clicking the icon in their file browser. A workaround is to open a terminal in that folder and type: ./netradiant

Arch Linux users can also use the netradiant-git PKGBUILD to get the editor.

Note: NetRadiant-custom will not work.

You may have heard of a fork named netradiant-custom by Garux and may be wondering if it can be used for mapping with Unvanquished. While it features very interesting things, it will unfortunately not be compatible: this fork derivated from mainstream around 2014 and most of the development that happened upstream to support Unvanquished is missing. It does not support the DPK game archives neither the DPKdir source repositories. The WebP and CRN image formats used by the released game are not supported, and the support of the PNG image format may not be complete. One good news though: support for IQM model format was recently added but we didn't tested this yet. The produced minimaps will not work in game (one needed file isn't generated). That editor may provide a (maybe obsolete) Unvanquished gamepack that will give you the impression it will work with the game but even if that editor starts you will not be able to do anything with it, and our official Unvanquished gamepack will not work because of missing features. We don't provide support for that alternate radiant.

Start up NetRadiant for the first time

When you first start up NetRadiant you will be asked what game you want to edit levels for.

You may also be asked for the game's engine path if NetRadiant can't find it. This is the basepath in table below. This is the location where the game stores its pkg folder holding the many .dpk resources.

If you installed the game using Flatpak or Universal zip or other means, see Game locations for specific paths.

When using the Unvanquished launcher, the default system paths are:

Finally you should be greeted by NetRadiant's default interface: 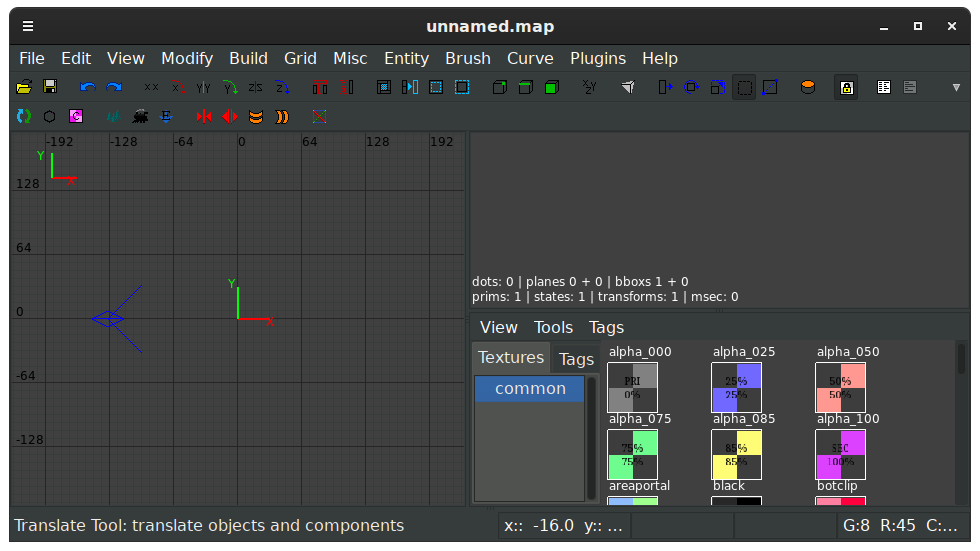 Make sure you have a common shader category. If you do not, contact the devs via chat or the forums.

This is not a complete guide. Another tutorial will be required to tell how to make a complete map with required entities and all, but if you already mapped for other games before, this will give you the prerequisites you may miss.

Let's imagine you want to edit the chasm map :

Making a new map from scratch

Let's imagine you want to make a map named castle: