The terms lossy and lossless are used multiple times in this page. Lossy means that images compressed using that format will lose some of their image quality to save space. Lossless means that the compression will not sacrifice image quality, no matter how much you compress the image with that format.

The following licenses are suitable for images:

The default contribution license is CC BY-SA 4.0, unless you specify another license, by contributing to Unvanquished you are placing your work under CC BY-SA 4.0 license. You must have right to.

Older licenses like CC BY-SA 3.0, CC BY-SA 2.5, and CC BY-SA 3.0, CC BY-SA 2.5 are fairly acceptable for importing existing media. Many of our older media use such licenses, but please not use those older licenses for brand new content when you have full power to use latest version of those licenses. If you can get permission from original author to get a newer or more permissive license, please get it. For Creative Commons licenses older than 3.0, please ask us before merging.

See the page Licenses/Media for details.

The engine supports the following formats:

Unvanquished project made the choice to use PNG as image format in repositories at a time WebP wasn't well supported, using PNG optimizers to get the smaller PNG file possible. If you're going to create a new project using the Dæmon engine, you may want to chose lossless WebP as image format in repositories, since there is now a wide support in image viewers, featureful image editors like GIMP, etc. and is a better format: compresses faster and produces smaller files for far less computing cost, without requiring optimizers. If you chose WebP as a default format for your repositories, read “convert to PNG” as “convert to lossless WebP” in next sentences.

It's recommended to store data files in well-known lossless formats in data repositories.

Convert TGA or lossless Webp to PNG to store them in repositories. It's better to compress to specific formats (CRN, WebP) while you distribute your work for use in game, but please keep them lossless and in widely-used formats in repositories!

If your original file is already in JPEG format or lossy WebP, store it as is without recompressing it to something else.

Because CRN, KTX or DDS may not be easy to edit, you may want to convert them back to lossless PNG anyway to make to make them easy to edit. You may otherwise prefer to just store them as is to prevent further lossy recompression. Official Unvanquished data repositories will not accept CRN, KTX or DDS files.

It is good to store GIMP's .xcf source in repositories. Because Git is not for big large heavy weighty files, please tick the compression option when saving from GIMP (if you don't have this option, your version of GIMP is old, please update!), then save as .xcf.xz to get even more compression (or compress the .xcf file with xz before committing).

Those are recommended image formats to be used in source repositories and in game to be delivered to players, and related tools.

Creating textures for use with the modern OpenGL3 renderer of the Dæmon engine is slightly different than texture creation for the renderer of the old Quake 3 engine you may know. This is not due to changes in formats or the like, but because of how additional rendering technologies change what information is to be encoded in which textures. Each successive rendering technology removes further information from your base texture, until only albedo (diffuse) remains: 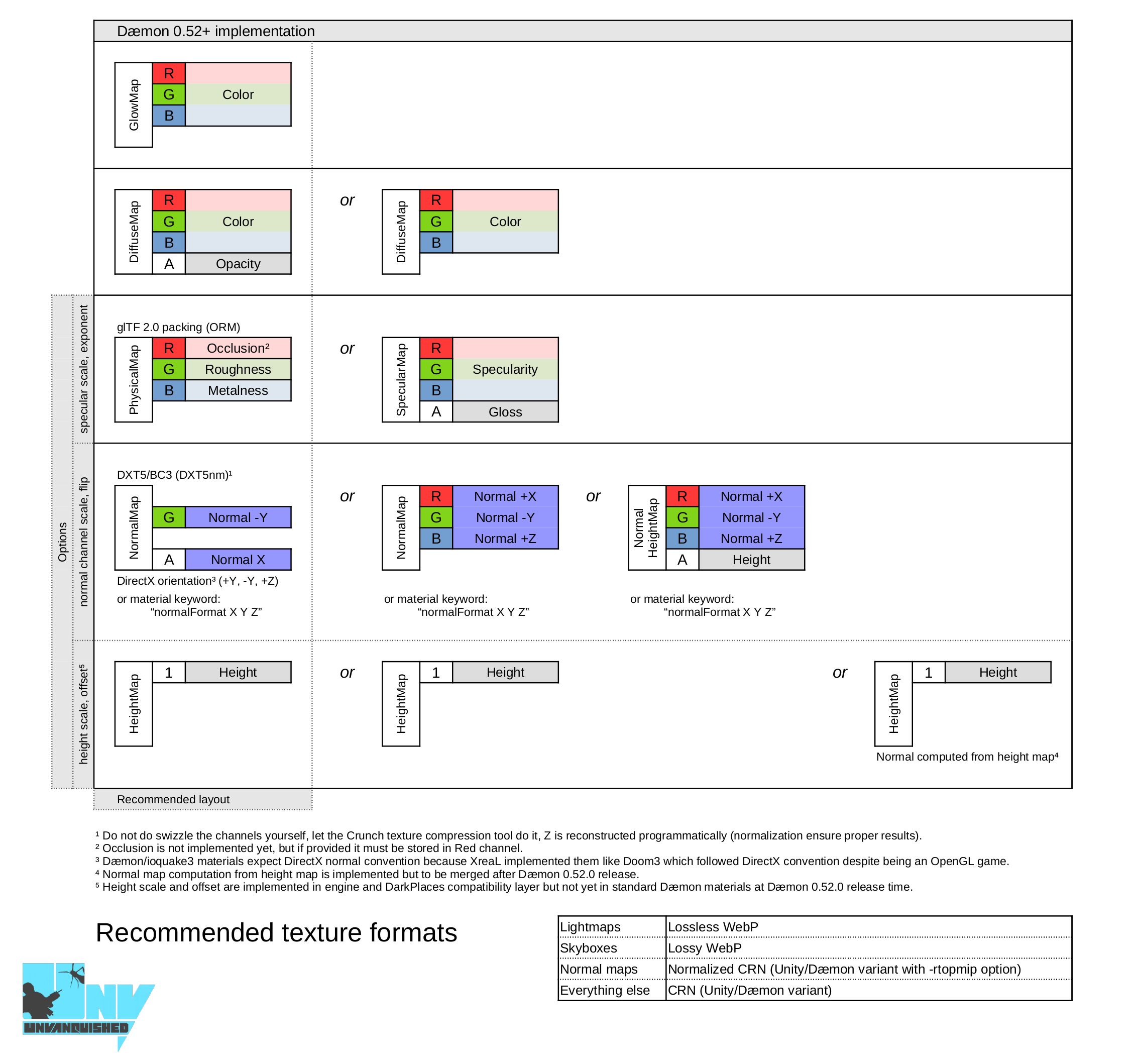